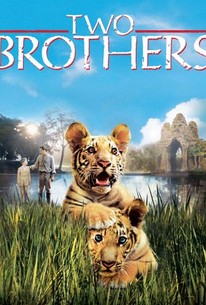 Like The Bear, director Jean-Jacques Annaud's acclaimed animal picture released 15 years prior, Two Brothers offers a family-friendly epic as told through the eyes of its four-legged protagonists, who, in this case, are sibling tiger cubs Koumal and Sangha. Though a life in the jungles of French colonial Indochina circa the 1920s seemed certain, the cubs are separated shortly after their birth when the notorious hunter Aidan McRory (Guy Pearce) kills their father. Koumal is whisked away to a circus, where he is cruelly beaten into submission and forced to perform tricks to earn his keep. Sangha fares better at first -- he lands in the posh estate of a French government official who wants the big cat to serve as a companion for his lonely son, though a series of unforeseen circumstances ultimately finds Sangha in the hands of a man determined to turn him into an aggressive prizefighter. Understandably, neither tiger is happy with his arrangements, and both escape captivity in hopes of returning to the jungle. Unfortunately for them, the prospect of two loose tigers is hardly comforting for the locals, who quickly demand that McRory kill the cubs before they threaten the safety of the village. Once McRory finds the tigers in their natural habitat, however, he faces a crisis of conscience he hadn't thought possible. Two Brothers also features Jean-Claude Dreyfus and Freddie Highmore.

Oanh Nguyen
as His Excellency

Bernard Flavien
as His Excellency's Majordomo

Pring Sakhorn
as Dignitary with Goldfish

Cats vs Dogs: Who Have The Best Movies?
Now THAT’S a Big Shark!
"The Incredibles," "Sideways" Tops in the 6th Annual Golden Tomato Awards
View All