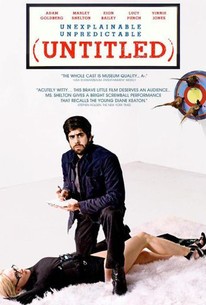 This satire on the art world is at times both clever and shallow, but its top-notch cast generates plenty of goodwill.

The uncomfortable merger of art and commerce leads to an unstable romantic triangle in this satiric comedy from director Jonathan Parker. Madeleine (Marley Shelton) is a beautiful young woman who runs an upscale art gallery in New York City. While Madeleine prides herself on exhibiting the most daring and cutting-edge work on the East Coast, her dirty little secret is that she's able to keep the place open by selling the bland but accessible work of her boyfriend (Eion Bailey), whose paintings are quite popular with corporate clients. However, Madeleine is drawn to moody creative types, and her boyfriend makes the mistake of introducing her to his brother (Adam Goldberg), an avant-garde composer whose music is built around breaking glass and the clatter of metal objects. Before long, Madeleine has fallen for the pretentious composer and has to choose between him and the man who can keep her gallery in the black. Also starring Vinnie Jones and Zak Orth, (Untitled) received its world premiere at the 2009 Palm Springs International Film Festival. ~ Mark Deming, Rovi

Lucy Punch
as The Clarinet

Lawson White
as Seth
View All