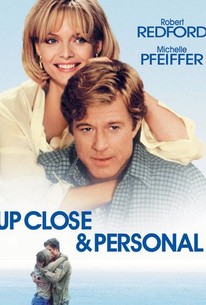 Up Close & Personal wastes its superstar leads and compelling fact-inspired story on a treacly romance bereft of onscreen chemistry.

A story about a career television journalist who eclipses her mentor, this drama's plot resembles that of A Star Is Born, and it shares the same screenwriters as those who penned the 1976 version of that film, John Gregory Dunne and Joan Didion. It's based loosely on the real-life story of newscaster Jessica Savitch. Sally Atwater (Michelle Pfieffer) gets a job at a Miami TV station based on a demo tape from her hometown of Reno, Nevada. The station's news director is Warren Justice (Robert Redford), a former high-profile Washington newsman whose career has suffered from his insistence on integrity. He makes Sally his gofer and criticizes her clothes and appearance while she begs him for a chance to go on-air. She becomes the station's weathercaster and Warren gives her the stage name of Tally. With Warren's constant advice, she breaks into news reporting and her star rises quickly as the two become romantically involved. She takes a better job in Philadelphia, with Warren's blessing, and there she soon eclipses the anchorwoman Marcia McGrath (Stockard Channing). From there, Tally's career continues to flourish, while her relationship with Warren takes some strange twists and turns.

Joe B. Shapiro
as Waiter

News & Interviews for Up Close & Personal

Critic Reviews for Up Close & Personal

Audience Reviews for Up Close & Personal