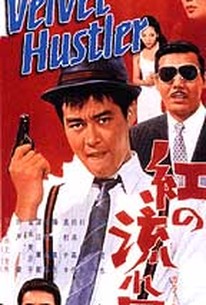 A clever hit man discovers his weakness when he becomes attracted to the wrong woman in this stylish crime thriller, whis has often been compared to Jean-Luc Godard's A Bout de Souffle. Goro (Tetsuya Watari) is a gunman with the Yakuza (the Japanese Mafia) who one day turns on his crime boss and murders him; hoping to avoid retaliation, he travels to the coastal city of Kobe, and takes an assignment as a strong-arm man protecting a string of Yakuza-connected prostitutes. Rather than hiding where he cannot be found, Goro puts himself so far into the open that no one figures he could be the killer. However, Goro makes the mistake of falling in love with an attractive woman (Ruriko Asaoka) who learns his deadly secret; soon the story has been spread to another killer-for-hire (Jo Shishido), and from there to the Kobe authorities, putting Goro in tremendous danger. Kurenai No Nagareboshi, which has also been distributed under the titles Velvet Hustler, Crimson Comet, and Like A Shooting Star, was a stylized remake of Crimson Seaport, an early feature from the same director, Toshio Masuda. ~ Mark Deming, Rovi

There are no critic reviews yet for Velvet Hustler. Keep checking Rotten Tomatoes for updates!

There are no featured audience reviews for Velvet Hustler at this time.