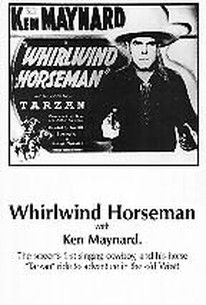 The first of six Ken Maynard Westerns produced on the cheap by the Alexander brothers, Max and Arthur, Whirlwind Horseman awarded Ken one of filmdom's least memorable sidekicks, Bill Griffith. En route to their friend Cherokee Jake's (Budd Buster) gold mine, Ken and Happy Holmes are waylaid by Peggy Radford (Joan Barclay), who is in trouble with a gang of cattle rustlers. Ken kills one of the bandits during an attack on the Radford ranch only to discover that the snakeskin the dead man was wearing belongs to Cherokee. At one point, Ken suspects Peggy's father (Joseph W. Girard) of being the secret leader of the rustlers, but further investigation reveals him to be Banker Harper (Kenneth Harlan), who wanted to buy up cheaply the land surrounding Cherokee's mine. The Whirlwind Horseman was memorable to Maynard only because he had battled a furious cold all through the filming.

Walter Shumway
as The Sheriff

Tarzan the Horse
View All

There are no critic reviews yet for Whirlwind Horseman. Keep checking Rotten Tomatoes for updates!

There are no featured audience reviews for Whirlwind Horseman at this time.