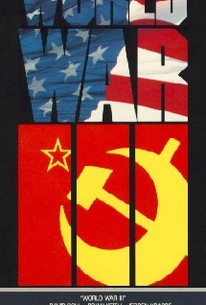 World War III is an ambitious if unnecessarily protracted speculative TV movie. Set in a "future December," the film prophesies an American grain embargo levied on Russia. US President Rock Hudson is entreated by the Soviet higher-ups to drop the ban; meanwhile, a group of renegade Russian military officers begin sending expeditionary forces into Alaska. While the countdown to Doomsday begins, the film insists upon cutting back to several expendable romances in both the American and Soviet camps. Boris Sagal, the original director of World War III, was killed in a freak helicopter accident while on location. To make up for lost time, the production was moved to the soundstages of Zoetrope Studios and overseen by ultra-efficient TV director David Greene. Part Two finds novice American president Rock Hudson trying to effect an honorable peace with Soviet premiere Brian Keith. But insurgent military officers endeavoring to seize the Alaska Pipeline as a bargaining chip continue to escalate the hostilities. It develops that the fate of the world may rest in the hands of American colonel David Soul. Also appearing is Cathy Lee Crosby, endearingly miscast as an intelligence officer. A heart-stopping surprise twist brings World War III to a close. While the film has its moments of genuine suspense, one can't help but feel that World War III would have been better an hour or two shorter--or at least with a few of the subplot romances removed. Originally running four hours, World War III was telecast in two parts on January 31 and February 1, 1982.

Joe Medalis
as David
View All

There are no critic reviews yet for World War III. Keep checking Rotten Tomatoes for updates!

There are no featured audience reviews for World War III at this time.