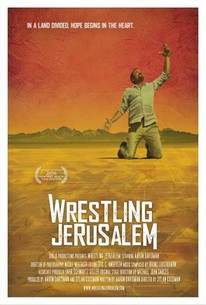 In a tour-de-force performance, writer-actor Aaron Davidman conjures a host of different characters while seeking answers to the Israeli-Palestinian conflict in WRESTLING JERUSALEM. Creatively adapting his acclaimed one-man stage show using only simple props and backdrops, Davidman takes a multidimensional journey into the heart of the Middle East, and the intersection of politics, identity and spiritual yearning. He embodies and gives voice to 17 different characters on all sides of the existential divide--deftly moving between male and female, Jewish and Muslim, Israeli and Arab--modeling what it takes truly to bear witness through the eyes of the other. Challenging long-held beliefs with sharp and unblinking observation, Davidman finds both entrenched isolation and shared humanity in the shifting moral compasses and competing narratives of all his characters. Filmmaker Dylan Kussman moves freely and seamlessly among three locations--a live theater audience, the open expanse of a vast desert, and a small dressing room--exploiting the interplay of theatrical spontaneity, cinematic poetry, and spiritual intimacy. The result is a unique hybrid of stage and cinema that reignites hope for the future of this troubled region.

There are no featured audience reviews for Wrestling Jerusalem at this time.