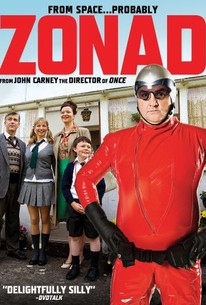 John Carney, acclaimed director of the 2006 musical drama Once, reteams with his brother Kieran for this feature-length take on their 2003 comedy short concerning an escaped rehab patient who tricks the residents of a small town in to believing he's a visitor from another planet. Returning home one evening to find a strange man in a futuristic helmet and red vinyl suit passed out on their living room floor, the Cassidy family makes no attempts to question his claims that his name is Zonad (Simon Delaney) and that he hails from deep space. And though at first Zonad is reluctant to accept the hospitality of the Cassidies and the other, blissfully naïve families in the quaint community of Ballymoran, he is soon won over by their generous offers of beer, and the curiosity of the local females. Little does everyone realize that Zonad's actual name is Liam Murphy, and he is in fact a major alcoholic who has recently fled from a nearby treatment facility - and he's moer than happy to take full advantage of their unceasing generosity. But when Zonad takes things too far by accepting the advances of pretty Ballymoran teen Jenny (Janice Byrne), Jenny's jealous boyfriend Guy (Rory Keenan) starts to realize that they're all being taken for suckers, and vows to reveal Zonad for the fraud that he is.

There are no critic reviews yet for Zonad. Keep checking Rotten Tomatoes for updates!