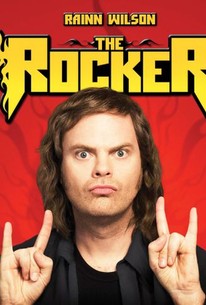 With a predictable and lightweight story, the earnest efforts of the cast are squandered by The Rocker's bland script.

The Office star Rainn Wilson portrays a drummer named "Fish," who gets a second shot at fame 20 years after getting kicked out of his band on the very night they signed the record contract that made them stars. Fish has spent the past two decades languishing at soul-crushing day jobs while his old bandmates became legends, continuing to grace magazine covers and dominate the radio. He might just get another chance at musical success, however, when his teenage cousin invites him to drum for his high school garage band, and they end up catching the ear of record executives. Now, Fish is determined to live the hedonistic rock & roll lifestyle he missed out on 20 years ago, but his new bandmates don't appreciate his hard partying -- and neither do his middle-aged knees. This Fox Atomic comedy co-stars Christina Applegate. Shawn Levy (Night at the Museum) and Tom McNulty co-produced the feature, which was penned by Wallace Wolodarsky and Maya Forbes, and directed by Peter Cattaneo (Opal Dream).

News & Interviews for The Rocker

Critic Reviews for The Rocker

Audience Reviews for The Rocker