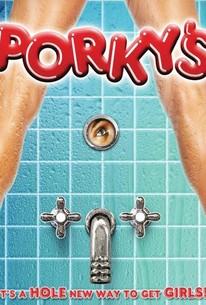 Gleeful in its misogyny and celebratory of bad behavior, Porky's is an intermittently funny farce that will leave audiences feeling in need of a shower.

Love it or loathe it (and there are a goodly number of people on either side), Porky's was one of the most successful comedies of its day, spawning two direct sequels and inspiring an incalculable number of lowbrow teen comedies, most recently including American Pie (1999). Pee Wee (Dan Monahan), Billy (Mark Herrier), Tommy (Wyatt Knight), and Mickey (Roger Wilson) are four painfully horny high school kids growing up in South Florida in the 1950's. Desperate to rid themselves of their cumbersome virginity, they head out to a sleazy bar near the swamps called Porky's, where local legend has it that the owner will fix you up with a prostitute for a reasonable fee. After Porky takes their money and dumps them in the swamp, the guys vow to get revenge. Meanwhile, Pee Wee has to deal with his shrinking penis, someone drills a hole in the wall of the girl's shower, the guys encounter a prostitute named Cherry Forever, and anti-Semitism rears its ugly head. Cheerfully rude in a manner few mainstream films had achieved at that time, Porky's, for better or worse, changed the standard of what was acceptable in a screen comedy. Remarkably enough, two years later director Bob Clark made the holiday favorite A Christmas Story, which displayed his considerable range, if nothing else.