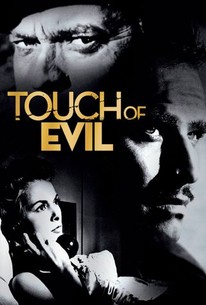 Artistically innovative and emotionally gripping, Orson Welles' classic noir is a visual treat, as well as a dark, sinister thriller.

This baroque nightmare of a south-of-the-border mystery is considered to be one of the great movies of Orson Welles, who both directed and starred in it. On honeymoon with his new bride, Susan (Janet Leigh), Mexican-born policeman Mike Vargas (Charlton Heston) agrees to investigate a bomb explosion. In so doing, he incurs the wrath of local police chief Hank Quinlan (Welles), a corrupt, bullying behemoth with a perfect arrest record. Vargas suspects that Quinlan has planted evidence to win his past convictions, and he isn't about to let the suspect in the current case be railroaded. Quinlan, whose obsession with his own brand of justice is motivated by the long-ago murder of his wife, is equally determined to get Vargas out of his hair, and he makes a deal with local crime boss Uncle Joe Grandi (Akim Tamiroff) to frame Susan on a drug rap, leading to one of the movie's many truly harrowing sequences. Touch of Evil dissects the nature of good and evil in a hallucinatory, nightmarish ambience, helped by the shadow-laden cinematography of Russell Metty and by the cast, which, along with Tamiroff and Welles includes Charlton Heston as a Mexican; Marlene Dietrich, in a brunette wig, as a brittle madam who delivers the movie's unforgettable closing words; Mercedes McCambridge as a junkie; and Dennis Weaver as a tremulous motel clerk. Touch of Evil has been released with four different running times -- 95 minutes for the 1958 original, which was taken away from Welles and brutally cut by the studio; 108 minutes and 114 minutes in later versions; and 111 minutes in the 1998 restoration. Based on a 58-page memo written by Welles after he was barred from the editing room during the film's original post-production, this restoration, among numerous other changes, removed the opening titles and Henry Mancini's music from the opening crane shot, which in either version ranks as one of the most remarkably extended long takes in movie history. ~ Hal Erickson, Rovi

Keenan Wynn
as Man
View All

News & Interviews for Touch of Evil

Critic Reviews for Touch of Evil

Audience Reviews for Touch of Evil