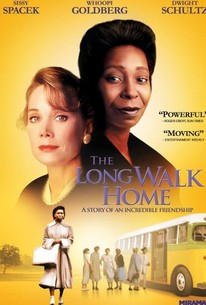 The Long Walk Home is a recreation of a troubled era in American history. The time is 1955; the place, Montgomery, Alabama. When Rosa Parks, an African American woman, is arrested for refusing to give up her bus seat to a white man, it is the first volley in the great Bus Boycott, organized by Dr. Martin Luther King in order to desegregate the Birmingham transportation system. The boycott is a decided inconvenience for Miriam Thompson (Sissy Spacek), a well-to-do white woman. Now, Miriam must drive to the black section of town to pick up her maid Odessa Cotter (Whoopi Goldberg) and bring her to work. Outside of her own social circle, Miriam realizes for the first time just how privileged, sheltered and self-centered her life has been. What brings this fact home is the realization that Odessa has literally been raising two families: the Thompsons' and her own. Odessa has also sacrificed her own health and wellbeing to serve her employers without question or complaint. Awakened to the true inequities of "Separate But Equal", and impressed by Dr. King's edict of nonviolent resistance, Miriam joins the boycott. This stirs up the racist feelings harbored by Miriam's husband Norman (Dwight Schultz), who at the behest of his goonish brother Tunker (Dylan Baker) joins the Klanlike White Citizen's Council.

Dorrell Dorsey
as Woman in Church

Cynthia B. Williams
as Housekeeper

Dan Jenkins
as Auburn Fan No. 1

Kevin Thigpen
as Worker No. 1

A. Bernard Sneed
as Organist

Cherene Snow
as Claudia
View All