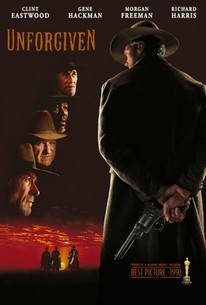 As both director and star, Clint Eastwood strips away decades of Hollywood varnish applied to the Wild West, and emerges with a series of harshly eloquent statements about the nature of violence.

Dedicated to his mentors Sergio Leone and Don Siegel, Clint Eastwood's 1992 Oscar-winner examines the mythic violence of the Western, taking on the ghosts of his own star past. Disgusted by Sheriff "Little Bill" Daggett's decree that several ponies make up for a cowhand's slashing a whore's face, Big Whiskey prostitutes, led by fierce Strawberry Alice (Frances Fisher), take justice into their own hands and put a $1000 bounty on the lives of the perpetrators. Notorious outlaw-turned-hog farmer William Munny (Eastwood) is sought out by neophyte gunslinger the Schofield Kid (Jaimz Woolvett) to go with him to Big Whiskey and collect the bounty. While Munny insists, "I ain't like that no more," he needs the bounty money for his children, and the two men convince Munny's clean-living comrade Ned Logan (Morgan Freeman) to join them in righting a wrong done to a woman. Little Bill (Oscar-winner Gene Hackman), however, has no intention of letting any bounty hunters impinge on his iron-clad authority. When pompous gunman English Bob (Richard Harris) arrives in Big Whiskey with pulp biographer W.W. Beauchamp (Saul Rubinek) in tow, Little Bill beats Bob senseless and promises to tell Beauchamp the real story about violent frontier life and justice. But when Munny, the true unwritten legend, comes to town, everyone soon learns a harsh lesson about the price of vindictive bloodshed and the malleability of ideas like "justice." "I don't deserve this," pleads Little Bill. "Deserve's got nothin' to do with it," growls Munny, simultaneously summing up the insanity of western violence and the legacy of Eastwood's Man With No Name. ~ Lucia Bozzola, Rovi

Jaimz Woolvett
as The Schofield Kid

Shane Meier
as Will Munny

George Orrison
as The Shadow