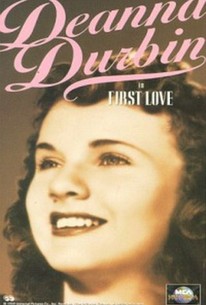 Best remembered as the film in which 17-year-old Deanna Durbin receives her first screen kiss, First Love is a modernized variation of the Cinderella legend (there's even "six white mice" in the form of a sextet of motorcycle policemen!). The film casts Durbin as Constance Harding, the poor relation of wealthy tycoon James Clinton (Eugene Pallette). When she comes to live with the Clinton family, she runs headfirst into her eccentric, social-climbing aunt Grace (Leatrice Joy) and her nasty, nightclub-hopping cousin Barbara (Helen Parrish); James himself rather likes the girl, but most his attention is directed towards dealing with his monumentally lazy son Walter (Lewis Howard in a comic turn). Left behind on the night of a fancy society ball, Constance is championed by the household servants, who provide her with a gorgeous gown and transportation to the event. She meets her Prince Charming in the form of likeable socialite Ted Drake (Robert Stack in his film debut)- but, just after the stroke of midnight, leaves her slipper behind. Later that night, the hateful Barbara convinces Constance that Ted was only toying with her emotions. Sorrowfully, Constance decides to return to school and bury herself in her studies, only to be dissuaded by her head teacher (Kathleen Howard), who made the same mistake herself many years before. Naturally there's a happy ending, with time to spare for Durbin to sing five numbers, including the Puccini-inspired aria "One Fine Day".

There are no featured audience reviews for First Love at this time.