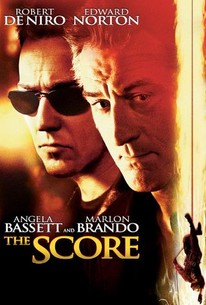 Though the movie treads familiar ground in the heist/caper genre, Robert DeNiro, Edward Norton, and Marlon Brando make the movie worth watching.

Three generations of method acting giants unite for this crime thriller written by Kario Salem and directed by Frank Oz. Robert De Niro stars as Nick Wells, an aging thief whose specialty is safecracking and who is on the verge of retiring to a life of ease, running his jazz club and romancing his girlfriend Diane (Angela Bassett). But before he can ride off into the sunset, Nick is pressured to do one last job by his mentor and business partner, a flamboyant and extravagant upscale fence named Max (Marlon Brando). Max is plotting the heist of the Montreal Customs House, and he's got a man on the inside, Jackie Teller (Edward Norton), a talented but volatile crook who has managed to ingratiate himself with the facility's staff as a fellow employee suffering from cerebral palsy. Jackie bristles at Nick's interference in "his" score, however, and threatens violence when it seems he's going to be cut out of the action. In the meantime, Nick grows increasingly ill at ease about the operation, as it violates his two most important dictums in thievery: always work alone and never pull a job in your own city. The part of Max in The Score was written specifically for Brando by screenwriter Salem, although the improvisational star and his director Oz reportedly clashed during filming. ~ Karl Williams, Rovi

Marie-Josee D'Amours
as Woman in Study

Gavin Svensson
as Man in Study

Cassandra Wilson
as Herself

Mose Allison
as Himself
View All

News & Interviews for The Score

Critic Reviews for The Score

Audience Reviews for The Score