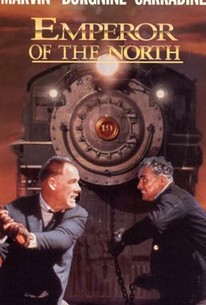 In this gritty and violent period drama set in the depths of the Great Depression, Lee Marvin stars as "A No. 1", the acknowledged King of the Hoboes. A No. 1 is famous among his fellow tramps for his ability to catch a ride on any train, no matter how risky the hop or dangerous the guards. He acts as a sort of mentor for Cigaret (Keith Carradine), a young hobo who brags that some day he'll surpass A No. 1 in his accomplishments. But neither has had the courage to ride a train guarded by Shack (Ernest Borgnine), an unusually sadistic railroad cop who will brutally beat or even murder any man who tries to catch a ride on his train. A No. 1 is determined that no one, not even Cigaret, is going to deny him his title, so taking his life in his hands, he and Cigaret hop a ride on Shack's train, and they are soon bearing the full brunt of his violent nature. Emperor of the North features superb location photography by Joseph F. Biroc and a fine supporting cast, including Charles Tyner, Simon Oakland, Elisha Cook Jr., and Sid Haig.

Dave Willock
as Groundhog
View All