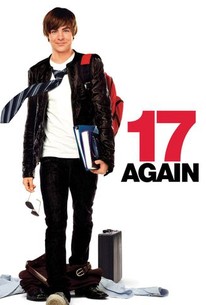 Though it uses a well-worn formula, 17 Again has just enough Zac Efron charm to result in a harmless, pleasurable teen comedy.

A former high school basketball star gets a second shot at life when he's miraculously transformed into a teenager and offered the opportunity to redefine his future. Back in 1989, Mike O' Donnell (Matthew Perry) had it all; not only was the 17-year-old senior the king of the basketball court, but college scouts were circling as well. But just as Mike's future began to glow brighter than ever before, he sacrificed everything in order to stay by his expectant girlfriend, Scarlet, and be a good father. Nearly 20 years later, Mike has just been passed over for a big promotion at work, his marriage is failing, and his teenage kids can't stand him. His dreams long gone and his family falling apart, Mike takes to staying with his best friend, Ned (Thomas Lennon), a former high school geek-turned-techno billionaire. Then, seemingly out of nowhere, Mike is transported back into his teenage body and given the given the unique opportunity to relive his salad days. But while Mike may look 17 again, his thirtysomething outlook at life puts him hopelessly at odds with the class of 2009. When Mike discovers that by attempting to recapture his best years he could risk losing all the best things he ever experienced in life, the time comes to make a decision that could have a drastic impact on both his past and his future. ~ Jason Buchanan, Rovi

RT on DVD: A Sweet I Love You, Man Deleted Scene, Zooey Deschanel’s Latest, and More
Tune In to the Rotten Tomatoes Show This Week!
Box Office Wrapup: Zac Attacks #1 Spot with 17 Again
View All