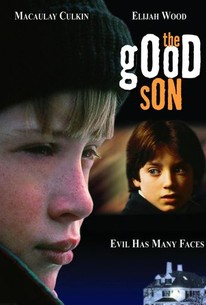 The Good Son is never good enough to live up to its unsettling potential, failing to drum up much suspense and unable to make Macaulay Culkin a credible psychopath.

Macaulay Culkin tries for a change of pace playing a schoolyard psychotic in The Good Son. When 12-year-old son Mark (Elijah Wood) is his mother's side as she's dying of cancer, she makes him promise her that she won't die. When she does die, Mark is consumed with grief, as well as guilt that he couldn't keep his promise. Mark's father Jack (David Morse) has to go away for a two week business trip to Tokyo shortly after his wife's death. Thinking that the blustery Maine environment will do him good, he drops Mark off with the family of his Uncle Wallace (Daniel High Kelly). At first, Mark is withdrawn, but soon he begins to warm to his Aunt Susan (Wendy Crewson), his cousin Connie (Quinn Culkin), and particularly his cousin Henry (Macauley Culkin). Mark and Henry pal around together, but Mark begins to notice some of Henry's ideas of fun differ significantly from his own. For example, Henry demonstrates his homemade crossbow by killing the neighbor's dog, and shows Mark his dummy (called "Mr. Highway") that he drops from an overpass onto a highway, causing a 10-car pileup. Mark begins to suspect that the death of Henry's baby brother wasn't an accident, and it appears Henry is now making plans to rub out his sister. But when Mark tries to warn Henry's parents of their son's homicidal tendencies, they refuse to listen to him. ~ Paul Brenner, Rovi

Keith Brava
as Doctor in Blackport

Susan Hopper
as Woman at Rescue

Rory Culkin
as Richard in Picture
View All

Critic Reviews for The Good Son

Audience Reviews for The Good Son