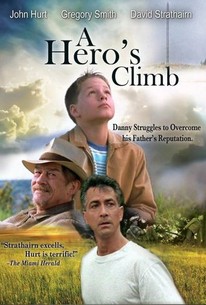 This warm-hearted drama chronicles the friendship between a troubled and picked-on 12-year-boy and an alcoholic, bad-tempered and terminally ill old neighbor. Their unlikely alliance is based on the old man's desire to die and the young one's need to prove himself courageous by climbing a 203-foot radio tower that has defeated all the other boys in town. He must hurry, for the tower has been deemed a safety hazard and will soon be demolished. Danny (Gregory Smith) wants to do this dangerous thing because he is tired of being teased and humiliated about his father, who has been branded a coward for not serving in Vietnam. The neighbor Mr. Langer (John Hurt) is slowly dying of lung cancer and only wants to die with dignity. Langer asks Danny to bring him a gun, but Danny who is Catholic, refuses to do this. Still a friendship forms that results in Langer's helping Danny to devise a rattletrap system of ropes and pulleys attached to a parachute harness to help him reach his goal. When the climb goes terribly wrong, it is up to Danny's father (David Strathairn) to prove himself and try to save the day.

Critic Reviews for A Hero's Climb

Audience Reviews for A Hero's Climb