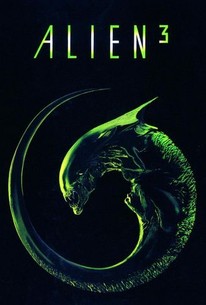 Alien3 takes admirable risks with franchise mythology, but far too few pay off in a thinly scripted sequel whose stylish visuals aren't enough to enliven a lack of genuine thrills.

Crash landing on a barren penal-colony planet with an unwelcomed visitor in tow, Ripley (Sigourney Weaver) contends with a group of hardened convicts while using nothing but her wits to battle a terrifying new breed of alien. The sole survivor of her crashed escape pod, Ripley is rescued from the craft by the remaining inhabitants of Fiorina 161, a group of rapists and murders who chose to repent for their sins in deep space after the penal colony was officially decommissioned. When remaining warden Andrews (Brian Glover) announces Ripley's presence to the inmates, their spiritual leader, Dillon (Charles S. Dutton), begins to fear that her presence will stir up trouble. As a result, Ripley is placed in the care of prison doctor Clemens (Charles Dance), and restricted to the infirmary until a rescue ship arrives. But Ripley isn't the only new visitor on Fiorina 161; an alien stowaway survived the crash as well, and it has planted its seed in a feral dog. Before long, a new breed of alien has burst from the dog's chest, a stealthy hunter that moves on all fours and can navigate the darkened prison corridors virtually undetected. When the inmates start to disappear, the remaining survivors must fight for their lives without weapons to defend themselves. The only person who knows the alien well enough to beat it is Ripley, and while her plan to corner and kill the creature just might work, a horrifying discovery reveals that her fight is far from over. ~ Jason Buchanan, Rovi

Danielle Edmond
as Newt
View All

Who Should The Aliens Fight Next?
Horror Movie Survivor Hall of Fame
Aliens vs. Predator: Requiem — See What A “Predalien” Looks Like!
View All