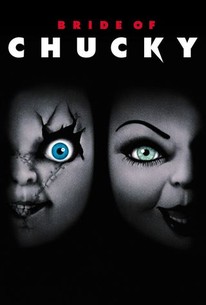 Bride of Chucky is devoid of any fright and the franchise has become tiresomely self-parodic, although horror fans may find some pleasure in this fourth entry's camp factor.

3:05
Bride of Chucky: Official Clip - I Always Come Back

This horror film, directed by Ronnie Yu, marked a return (after an eight-year lapse) of Chucky and the Child's Play series that began in 1988. At the moment of his death, the spirit of former serial killer Charles Lee Ray was mystically relocated in the doll Chucky (voice of Brad Dourif). After being salvaged from the evidence morgue by his ex-girlfriend Tiffany (Jennifer Tilly) and a corrupt cop, Chucky is put back in action when Tiffany sews his pieces back together and works a voodoo spell to revive his sinister self. Tiffany sees her dreams of marriage aren't working out, so she keeps Chucky locked away. After an escape, Chucky electrocutes Tiffany by pushing a radio into the bathtub, delivering a chant that puts the spirit of Tiffany into a bridal figurine. Chucky's amulet can switch them back into their original human forms, so they head for New Jersey where the amulet is buried -- putting cops in motion, along with car-crash carnage. ~ Bhob Stewart, Rovi

News & Interviews for Bride of Chucky

Critic Reviews for Bride of Chucky

Audience Reviews for Bride of Chucky