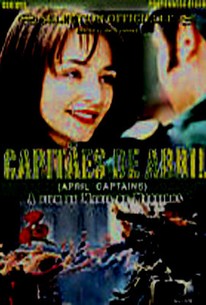 Renowned actress Maria de Medeiros directs this sweeping historical drama set in Portugal about the heady days leading up to April 25, 1974, when that country was finally freed from 40 years of Fascist rule. The film opens with a series of grisly black and white photographs of Portuguese war atrocities committed against its colonies -- Angola, Mozambique, and Guinea-Bissau. Antonia (de Medeiros) is a teacher who begs her minister-brother to release a couple of her students from the clutches of the secret police. As a result, she herself gets captured, interrogated, and tortured. At the same time, a young couple bid a tearful adieu at the train station just as the man, Capt. Maia (Stefano Accorsi) is drafted to fight in the colonies. Just before the youth gets shipped off to Africa, he manages to persuade the soldiers of a remote army outpost to rebel. Along with his buddies Lobao (Fele Martinez) and Antonia's ex-husband Manuel (Frederic Pierrot), Maia manages to storm a radio station and ultimately besiege the national guard barracks, which houses the president and military advisors. This film was screened at the 2000 Cannes Film Festival. ~ Jonathan Crow, Rovi

There are no critic reviews yet for Capitães de Abril (Captains of April). Keep checking Rotten Tomatoes for updates!