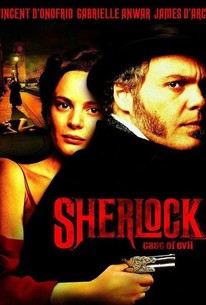 Another in a long line of "revisionist" Sherlock Holmes dramas, the made-for-cable Case of Evil offers a 28-year-old Holmes (James D'Arcy) who, in contrast with his later and more familiar persona, brashly brags about his deductive skills, egotistically basks in his fame and popularity, and drinks like a fish. But young Sherlock is in for a sobering and humiliating return to earth when he first crosses the path of Professor Moriarty (Vincent D'Onofrio), the "Napoleon of Crime." The brilliant but inexperienced Holmes not only fails to connect Moriarty with the murders of London's most notorious opium dealers, but even ends up falling into the clutches of the master criminal, who introduces the hapless detective to a relatively new and exotic drug known as heroin. Helping Sherlock put himself back together after his horrendous experience are his friend Dr. Watson (Roger Morlidge), his brother Mycroft (Richard E. Grant), and a comely young lady (Gabrielle Anwar) -- whose last name happens to be Doyle. The story is climaxed by a thrilling sword duel inside Big Ben (and never mind that the famous clock tower hadn't yet been built). Filmed in Romania, Case of Evil made its USA Network debut on October 25, 2002.

Critic Reviews for Case of Evil

Audience Reviews for Case of Evil