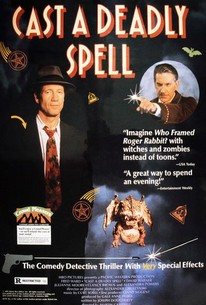 This clever and well-crafted production (produced for Home Box Office) goes the distance with its innovative concept, which is equal parts Raymond Chandler and H.P. Lovecraft. Taking place in 1948 Hollywood -- in an alternate reality where magic spells, curses and demons are commonly used and accepted -- the story revolves around hard-boiled gumshoe Harry P. Lovecraft (Fred Ward, looking nothing like his character's namesake and everything like Mike Hammer), the only detective in the business who relies on brains and instinct instead of gazing into a crystal ball or casting runes. This pure perspective is sought out by wealthy eccentric Amos Hackshaw (David Warner), who is trying to retrieve the legendary "Necronomicon" (a key component in the works of the real H.P. Lovecraft). The book is reputed to have the power to release the "Elder Gods" from their cosmic confines and return them to Earth, whereupon Hackshaw believes they will appoint him ruler of all mankind. The chief rival for possession of the book is a seedy gangster (Raymond O'Connor) whose favorite nightclub singer (Julianne Moore) takes a shine to Harry. Followed by a sequel, Witch Hunt, which applies a more sublime (if unnecessary) re-interpretation of the material, and features Dennis Hopper in the Lovecraft Role.