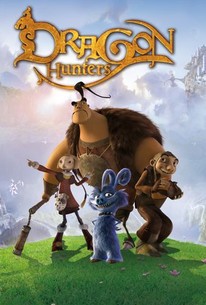 A little girl helps two would-be heroes save the world from a rampaging beast in this GCI-animated feature from France. Lord Arnold was once a brave warrior who frequently did battle with the World Gobbler, a fearsome dragon who would return every five years to bring destruction to everything (and everyone) in its path. However, Arnold is growing old, his vision is failing him and he's no longer up to the challenge of battling dragons. Arnold's niece Zoe is a spunky young girl who has learned to best the tiny dragons that play in the woods and wants to move on to more ambitious game, but Arnold is wary of letting her face the beasts he's chased most of his life. Fate steps in when Zoe gets lost in the forest and a pair of opportunistic wanderers, brave Lian Chu and conniving Gwizdo, find her and attempt to return her to her uncle in hopes of a reward. As they make their way back to Lord Arnold's castle, Lian Chu and Gwizdo find they've been misidentified as a pair of knights who've come to vanquish the World Gobbler, and with Zoe's help they square off against one of the world's most powerful dragons. The voice cast for the original French release of Chasseurs de Dragons included Marie Drion, Vincent Lindon, Patrick Timsit and Philippe Nahon; for its release in English-langue territories as Dragon Hunters, Forest Whitaker, Mary Mouser, Rob Paulsen and Dave Wittenberg headlined the vocal cast.

Rob Paulsen
as Gwizdo
View All