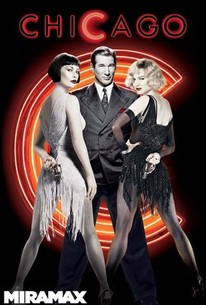 A rousing and energetic adaptation of the Broadway musical, Chicago succeeds on the level pure spectacle, but provides a surprising level of depth and humor as well.

A starry-eyed would-be star discovers just how far the notion that "there's no such thing as bad publicity" can go in this screen adaptation of the hit Broadway musical Chicago, originally directed and choreographed by Bob Fosse. In the mid-'20s, Roxie Hart (Renee Zellweger) is a small-time chorus dancer married to a well-meaning dunderhead named Amos (John C. Reilly). Roxie is having an affair on the side with Fred Casley (Dominic West), a smooth talker who insists he can make her a star. However, Fred strings Roxie along a bit too far for his own good, and when she realizes that his promises are empty, she becomes enraged and murders Fred in cold blood. Roxie soon finds herself behind bars alongside Velma Kelly (Catherine Zeta-Jones), a sexy vaudeville star who used to perform with her sister until Velma discovered that her sister had been sleeping with her husband. Velma shot them both dead, and, after scheming prison matron "Mama" Morton hooks Velma up with hotshot lawyer Billy Flynn (Richard Gere), Velma becomes the new Queen of the scandal sheets. Roxie is just shrewd enough to realize that her poor fortune could also bring her fame, so she convinces Amos to also hire Flynn. Soon Flynn is splashing Roxie's story -- or, more accurately, a highly melodramatic revision of Roxie's story -- all over the gutter press, and Roxy and Velma are soon battling neck-to-neck over who can win greater fame through the headlines. A project that had been moving from studio to studio since the musical opened on Broadway in 1973, Chicago also features guest appearances by Lucy Liu and Christine Baranski. ~ Mark Deming, Rovi