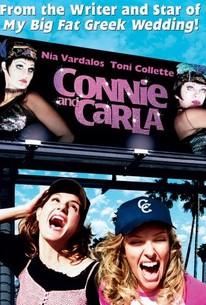 The two female leads, as well as energitic musical numbers, enliven an otherwise silly reworking of Billy Wilder's Some Like It Hot.

Connie and Carla are two small-town 'girls' whose dreams of stardom have taken them nowhere. From their debut in a school cafeteria to their current gig slinging drinks and belting out tunes at a Midwestern airport lounge, the singing and dancing duo simply refuse to let the less-than-enthusiastic crowd response dampen their showbiz drive. For Connie and Carla, everything's coming up roses, nay saying boyfriends and snoring audience members notwithstanding. The girls lose one of their few supporters when their boss Frank ends up on the wrong end of a criminal deal--a scene they unfortunately happen to witness. Quicker than a fast change in the second act, Connie and Carla pack up their battered dreams and extensive assortment of wigs and costumes and hit the road, running for their lives. Convinced the killers will never look for them in a place utterly devoid of culture, the pair ends up in the Land of Dreamers, Los Angeles. In a new place with new identities, they create a cover (with a lot of cover-up) that makes them the toast of the town--headlining in a local drag club, they soon find the acclaim that has always eluded them, singing the show tunes they've always loved. Being famous is their dream come true--who cares if includes a tiny little lie? But trying to keep their secret turns out to be a real drag, especially when Connie meets Jeff, a real nice guy with whom she'd really like to be a real girl.

Debbie Reynolds
as Herself

Kristi Angus
as Woman in Crowd

Fred Keating
as Man in Airport

June B. Wilde
as Woman in Airport

Critic Reviews for Connie and Carla

Audience Reviews for Connie and Carla