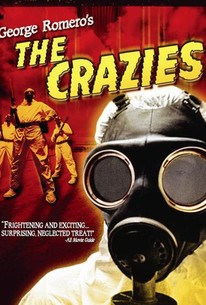 The Crazies isn't top-shelf Romero, but its blend of genre thrills and social subtext should still be enough to satisfy discerning horror fans.

George A. Romero returns to Night of the Living Dead turf with middling success in this quirky end-of-civilization thriller, also released as The Crazies. The paranoid scenario involves a government-engineered killer virus (identified by the title moniker) which is accidentally released into the water supply of Evans, Pennsylvania, driving most of the inhabitants stark-raving mad and forcing the declaration of martial law as the entire town is placed under quarantine. This does not sit well with the locals -- even those who have not yet been contaminated who consider the military mobilization tantamount to war. Romero keeps the momentum up by causing an escalating series of disasters, with each attempt at resolution making the horrors exponentially worse. One might be led to consider this a metaphor for Vietnam -- the military's presence is depicted as more threatening than the killers they've been sent to subdue -- but the film as a whole is too wildly erratic to focus on allegory, generating instead a ham-fisted criticism of government power. Pontificating aside, this is an effective, fast-paced thriller, thanks to some very effective setpieces, steadily mounting tension and outbursts of jarring violence.

Will Disney
as Dr. Brookmyre

Critic Reviews for The Crazies

Audience Reviews for The Crazies