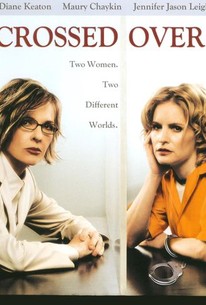 Based on the autobiographical book by novelist Beverly Lowry, the made-for-TV Crossed Over chronicles the unlikely friendship between Lowry and one of America's most notorious death-row inmates. Consumed by grief after the hit-and-run death of her 18-year-old son Peter (Nick Roth), Beverly Lowry (played by Diane Keaton, who also executive-produced the film) is unable to overcome her depression, despite the tender ministrations of her supportive husband Ethan (Maury Chaykin). But when a psychic informs her that her son's death was caused by a woman, Beverly obsessively begins researching the lives of other women who'd taken lives. The trail of information leads her to the infamous Karla Faye Tucker (Jennifer Jason Leigh), slated to become the first white woman executed for murder in Texas in 135 years. Although the film necessarily telescopes the facts (the actual relationship between Lowry and Tucker spanned nearly a decade), the film successfully details how Beverly's friendship with the doomed Karla enabled both women to expunge the demons within their respective souls. Filmed in Toronto, Crossed Over was originally aired by CBS on March 3, 2002.

Critic Reviews for Crossed Over

Audience Reviews for Crossed Over