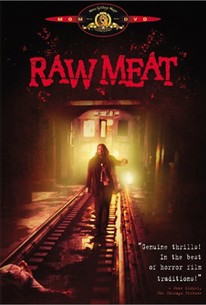 Gary Sherman's Death Line is one of those little-seen, long-forgotten 1970s horror films that's still championed by its core of fans. When the film was shown as part of a horror series at Lincoln Center in 2002, director Guillermo Del Toro (The Devil's Backbone) pronounced it one of his all-time favorites. In the film, Patricia (Sharon Gurney) and her American boyfriend, Alex (David Ladd, son of actor/producer Alan Ladd), find an important government official apparently unconscious on the stairs of a London Underground station. By the time they locate a cop to investigate, the body is gone. The sarcastically cynical Inspector Calhoun (Donald Pleasence) and his right-hand man, Rogers (Norman Rossington), take on the case. The culprit turns out to be a deranged man (Hugh Armstrong), the descendent of tunnel workers who were trapped in a cave-in and abandoned by the government at the turn of the century. "The Man" lives in the abandoned tunnel with his mate, "the Woman" (June Turner), and ventures into the Underground proper only to find hapless human victims and bring them back to their decrepit lair for food. When his mate dies, the Man goes in search of another. Put-off by Alex's lack of compassion, Patricia splits up with him, venturing into a train station alone, and before long, she finds herself in the underground hellhole. Christopher Lee makes a cameo appearance as an officious, meddlesome MI5. Much to Sherman's chagrin, his film was re-edited by the producers and released to American grind houses under the title Raw Meat. It was shown in Britain in its original form, under its original title. ~ Josh Ralske, Rovi

Hugh Armstrong
as "The Man"