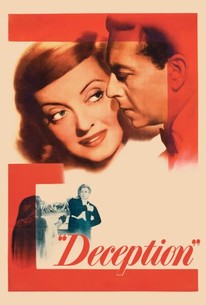 Deception is an operatic rehash of the 1929 film Jealousy. Music teacher Bette Davis--who evidently has a large student pool, judging by the size of her penthouse apartment--is reunited with her cellist lover Paul Henreid, whom she believed to have been killed in the war. Henreid wants to marry Davis, but he is unaware that she has, for the past several years, been the "protege" of composer Claude Rains. Rains agrees to keep quiet about his affair with Davis, but takes sadistic delight in tormenting the woman and working behind the scenes to sabotage Henreid's career. When Rains tells Bette of his plans to publicly humiliate Henreid, she shoots her ex-lover dead. Henreid agrees to stand by Davis no matter what is in store for her. Director Irving Rapper had originally wanted to treat the hoary plot twists of Deception comically, with the three principals walking off together at the end with a "what the hell?" attitude. He was tersely told to stick to the script; after all, people didn't pay to see Bette Davis but to see her suffer. Like the 1929 version of Jealousy, Deception was based on a play by Louis Verneuil.