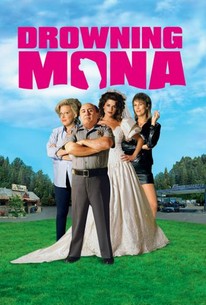 A whodunnit that stacks its lists of suspects with wasted character actors, Drowning Mona is a twee farce that will prompt audiences to tune out before the mystery is solved.

Rage, jealousy, murder, and Eastern European automotive engineering combine in this offbeat black comedy. Verplanck, NY, is a small town north of Manhattan that has the dubious distinction of being the Yugo capital of America; the ill-fated import compact was first test-marketed in Verplanck, and nearly everyone in town drives one. So no one finds it unusual when a yellow Yugo is seen floating in the river, though seeing someone trapped inside is out of the ordinary. Verplanck's chief of police, Wyatt Rash (Danny De Vito), discovers that the deceased driver was a prominent local citizen, Mona Dearly (Bette Midler), and the evidence suggests that Mona's death was no accident. But the investigation into Mona's murder is hampered by one rather significant detail: nearly everyone in town hated Mona and wanted her dead. She alienated her son Jeff (Marcus Thomas) and his business partner Bobby (Casey Affleck). Bobby's girlfriend Ellen (Neve Campbell) (who is also Rash's daughter) is convinced that Mona would have tried to drive a wedge into their relationship. Mona's husband Phil (William Fichtner) couldn't stand her and fell into an affair with Rona (Jamie Lee Curtis), the waitress at the local diner. And even Rash's sidekick, Deputy Feege (Peter Dobson), spent too much time on the wrong end of Mona's temper to care that she's dead. Before long, the question is no longer who is a suspect, but who isn't? Drowning Mona was directed by Nick Gomez, who earned positive notices for his independent films New Jersey Drive and Illtown.

Will Ferrell
as Cubby

Bonnie
as Peaches
View All