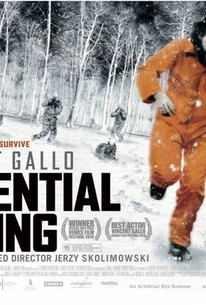 A soldier must fight for his own survival as well as the cause of his people in this powerful drama from acclaimed Polish filmmaker Jerzy Skolimowski. A pair of American security operatives (Zach Cohen and Iftach Ofir) are on patrol in Afghanistan when they stumble upon a Taliban fighter (Vincent Gallo), who kills them despite his terror and nervousness. While trying to escape, the Afghan is captured by American forces; he's tortured during interrogation, but doesn't tell the Americans anything, in part because an explosion has made it difficult for him to hear what they're saying. The Americans ship the Afghan off to a detention facility with a number of other Taliban soldiers, but upon arrival he's able to escape. However, the Afghan finds himself in a forbidding snowbound climate, and with no provisions or warm clothing he struggles to simply survive as he avoids his pursuers and struggles to find some way to get home. Shot with very little dialogue (and almost none delivered by leading man Gallo), Essential Killing received its North American premiere at the 2010 Toronto International Film Festival. ~ Mark Deming, Rovi

Klaudia Kaca
as Woman on Bicycle