Friday the 13th - The Final Chapter 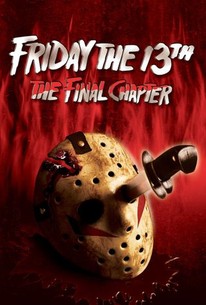 Friday the 13th - The Final Chapter

As lumberingly single-minded as its homicidal star, Friday the 13th - The Final Chapter adds another rote entry to an increasingly labored franchise.

Hockey-masked killer Jason Vorhees returns to terrorize a lakeside family and their rowdy teen neighbors in this fourth installment of the long-running slasher series. After the events of Friday the 13th, Part 3, Jason's seemingly lifeless body is brought to the morgue, where horny attendant Axel (Bruce Mahler) is trying to score with foxy Nurse Morgan (Lisa Freeman). The pair quickly meet a grisly end. Meanwhile, at Crystal Lake, estranged wife Mrs. Jarvis (Joan Freeman) and her kids -- young Tommy (Corey Feldman) and teenaged Trish (Kimberly Beck) -- find their quiet invaded by a group of hard-partying kids moving into the rental house next door. The youngsters include curious virgin Sara (Barbara Howard), hot-to-trot Samantha (Judie Aronson), and nebbish Jimmy (Crispin Glover). Tommy, a monster makeup enthusiast, enjoys watching the scantily clad young ladies through his window, while Trish toys with the idea of joining in their revelries. Also lurking around the area is Rob (Erich Anderson), who claims to be hunting bear but actually has mysterious ties to the events of Friday the 13th, Part 2. As the house full of teens begins to pair off -- aided by the addition of local twins Tina (Camilla More) and Terri (Carey More) to the mix -- an unseen killer begins to pick them off one by one. The bloodshed climaxes with a tense showdown in which Tommy disguises himself as a bald, lumpy boyhood version of Jason in hopes of distracting the relentless psychopath who hunts him. Feldman would return for a cameo in Friday the 13th, Part V: A New Beginning, only to be replaced by another actor in a grown-up version of the role. ~ Brian J. Dillard, Rovi

Robyn Woods
as Girl in Shower

News & Interviews for Friday the 13th - The Final Chapter

Critic Reviews for Friday the 13th - The Final Chapter

Audience Reviews for Friday the 13th - The Final Chapter