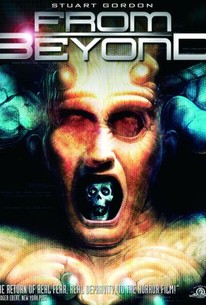 From Beyond Ratings & Reviews Explanation

The production team responsible for the twisted cult classic Re-Animator -- including director Stuart Gordon and producer Brian Yuzna -- returned the following year with this equally depraved (perhaps more so) follow-up, based once again (and very loosely) on the pulp-horror fiction of H.P. Lovecraft. Also returning to the fray is Jeffrey Combs, here playing the mild-mannered Crawford Tillinghast, apprentice to the dangerously obsessed Dr. Pretorious (Ted Sorel) and co-inventor of an enigmatic and ominous-looking device known as "The Resonator" -- a machine designed to stimulate the vestigial sensory apparatus contained within the human pineal gland. Such stimulation allows participants to "see" the slimy creatures which occupy a dimension parallel to our own, but with some chilling side effects -- the first of which being that the interdimensional vision works both ways. When a powerful sentient force devours Pretorious and assumes his consciousness, Tillinghast panics and destroys the Resonator -- soon to find himself in a padded cell, accused of his mentor's murder. Called to the case are Dr. McMichaels (Barbara Crampton, another Re-Animator alum) and amiable cop Bubba Brownlee (Dawn of the Dead's Ken Foree), who escort Tillinghast back to the shattered laboratory in an attempt to corroborate his deranged account by re-creating the experiment. Their attempts are all too successful, and the Pretorious-thing emerges to take control of the reactivated Resonator and draw the others into its hideous realm. Also called forth are the participants' darkest sexual desires -- another interesting by-product of pineal stimulation -- and, in Tillinghast's case, an uncontrollable urge to devour human brains. Just when it seems it can't get any weirder...it does. Gordon explores this demented scenario with relish, allowing nearly every scene to go completely over the top into surreal mayhem while retaining the dark brooding sense of menace characteristic of Lovecraft's work. (It's not likely, however, that the author's dignified upbringing would have explored the psychosexual dimensions of the premise -- at least not in the kind of detail seen here.) All manners of perversities abound, accompanied by the wizardry of four dueling special-effects studios and the rich, creepy score by Richard H. Band, bringing the film to a literally explosive climax and a chillingly poetic final shot.

Andy Miller
as Patient in Straitjacket

Critic Reviews for From Beyond

Audience Reviews for From Beyond