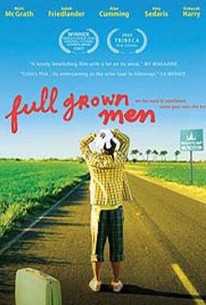 Just as its protagonist is stuck between childhood and adulthood, Full Grown Men waivers uncomfortably between comedy and drama, lacking the discipline to commit to either one.

The youthful delusions of a wistful husband and father prompt him to seek out a childhood friend and embark on a soul-searching journey of self discovery to the one place where no adult demands will be made of him in director David Munro's surreal second coming-of-age comedy. Alby (Matt McGrath) is having an early midlife crisis. Convinced that the only way to overcome his current malaise is to seek out his childhood pal Elias (Judah Friedlander) and set out on the open road, Alby leaves behind his wife and son in hopes of recapturing the glory of his youth. Unfortunately for Alby, Elias is all grown up now, and isn't exactly overjoyed to see the "best friend" whose rosy vision of childhood largely came from the fact that he made Elias the unwitting butt of his every joke. When Alby learns that Elias is taking a group of disabled drama students on a trip to the local amusement park, Elias has no choice but to let his pushy pal come along for the ride. What follows is a pensively hilarious look life as seen through the eyes of a man who can't seem to move past his youth, and the effect that a student-clown bartender (Amy Sedaris), a disgruntled former amusement park employee (Alan Cumming), a retired water-park mermaid (Debbie Harry), and a whole host of colorful characters have in helping Alby to bridge the gap between the glory days of his past and an uncertain future.

Carl Castleton
as Tricyclist No.1

Dulce Castleton
as Tricyclist No.2

Coman Munroe
as Man in Elevator

Critics Consensus: WALL-E Is the Best-Reviewed Film of 2008
View All