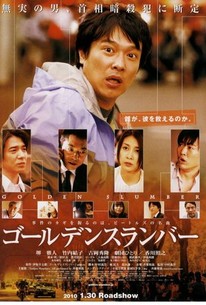 An ordinary man is suddenly suspected of plotting a high-tech political assassination in this suspense thriller from Japan. Aoyaga (Masato Sakai) is a deliveryman making his rounds one morning when a motorcade passes by, dominated by a limousine carrying Japan's newly elected prime minister. A moment later all is chaos when a bomb attached to a miniature helicopter swoops in and explodes, killing the new leader. A friend warns Aoyaga that being so close to the assassination will cause him trouble, and sure enough Aoyaga becomes the prime suspect in the killing and is on the run from the law as he tries to find a way to prove his innocence. While his former love Haruko (Yuko Takeuchi) and a handful of friends try to help Aoyaga stay free and prove he's not the assassin, it's harder than he expects, and the presence of a fugitive murderer in the neighborhood isn't helping. Goruden Suramba (aka Golden Slumber) was an official selection at the 2010 Berlin International Film Festival.

There are no critic reviews yet for Gôruden suranbâ (Golden Slumber). Keep checking Rotten Tomatoes for updates!

There are no featured audience reviews for Gôruden suranbâ (Golden Slumber) at this time.