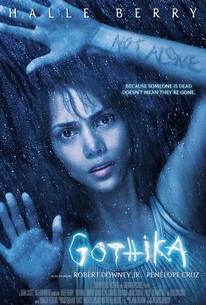 Berry's acting talents can't save Gothika from its preposterous plot and bad dialogue.

A brilliant and respected criminal psychologist, Dr. Miranda Grey is an expert at knowing what is rational. What is logical. What is sane. Under the direction of her husband, the chief administrator of the psychiatric ward at the Woodward Penitentiary for Women, Miranda treats dangerously disturbed patients like Chloe, an intensely charismatic murderess whose confessions of satanic torture are dismissed by the judicious doctor as the psychotic meanderings of a paranoid mind. But Miranda's comfortable marriage and stable life are thrust into terrifying jeopardy after a cryptic encounter with a mysterious young girl leads to a nightmare beyond her wildest imagination. When Miranda awakens from the horrific incident, she is shocked to discover that her husband has been murdered--and the bloody evidence points directly at her. Unable to fathom having committed an unmotivated act of such sheer brutality against a man she loved and admired, Miranda suddenly finds herself confined to Woodward alongside the highly unstable patients she used to treat with methodical detachment. With no memory of the night in question except for fractured visions of the hauntingly enigmatic girl, the doctor's behavior becomes increasingly erratic. Her claims of innocence are seen as the beginnings of a deep descent into madness by her former colleagues like Dr. Pete Graham, Miranda's sympathetic but skeptical coworker who is wrestling with issues of his own. Forced to rely on her instincts rather than facts, Miranda begins to believe that she has been possessed by a supernatural force determined to exact revenge at the expense of her sanity. As Chloe draws her deeper into her own personal hell, Miranda must determine if she is being driven to madness...or closer to the truth.

Noah Bernett
as Tim
View All