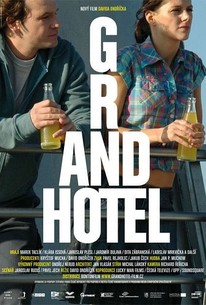 A man looking for a new life thinks one may have just come to him in this offbeat comedy from director David Ondricek. Fleischman (Marek Taclik) works as a repairman at the Jested Grand Hotel, a once-glamorous hotel in Liberec; he doesn't much care for his job, and while he was born and raised in the Czech Republic, he dreams of starting over somewhere else. Fleischman has also grown tired of his co-workers, including Zuzana (Dita Zabranska), the chambermaid who has a crush on him; horny desk clerk Jegr (Jaromir Dulava); and Franz (Ladislav Mrkvicka), en elderly man with a seemingly endless supply of stories about World War II. Fleischman starts thinking there might be a reason to stick around in Liberec after all when Ilja (Klara Issova, a beautiful woman with an unfortunate habit of stealing things, moves into the hotel. Fleischman falls head over heels for Ilja, and she's clearly attracted to him; she wants a child and Fleischman may be just the man to give her one, but there's a catch. Ilja already has a boyfriend, an obnoxious con man named Patka (Jaroslav Plesl) who sells worthless patent medicine to folks who don't know any better. A winner of two Czech Lion awards, Grandhotel was screened as part of the 2007 Berlin Film Festival. ~ Mark Deming, Rovi

There are no featured audience reviews for Grandhotel at this time.