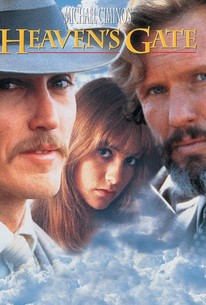 Heaven's Gate contains too many ideas and striking spectacle to be a disaster, but this western buckles under the weight of its own sprawl.

A notorious artistic and financial failure, Michael Cimino's Heaven's Gate was blamed for critically wounding the movie Western and definitively ushering out the 1970s Hollywood New Wave of young, brash, independent filmmakers. Taking a revisionist, post-Vietnam view of American imperialism, Cimino used the historical Johnson County War incident in Wyoming to create an impressionistic tapestry of Western conflict between poor immigrant settlers and rich cattle barons led by Canton (Sam Waterston) and his hired gun Nate Champion (Christopher Walken). Attempting to mediate is idealistic Harvard graduate and county marshal Averill (Kris Kristofferson), who is both Nate's friend and his romantic rival for the affections of Ella Watson (Isabelle Huppert). However, war erupts, at great cost to all involved. Flush from his success with the Oscar-winning The Deer Hunter (1978), Cimino demanded creative control, and his insistence on shooting on location and building historically accurate sets and props multiplied the film's original budget to a then-astronomical $36 million. When United Artists premiered the original 219-minute version (sight unseen), they discovered that Cimino had produced an elliptical epic, compounding the box-office difficulties of making a Western without any major stars. Critics howled about Cimino's incomprehensible self-indulgence, and United Artists pulled the film after several days. Re-released five months later, 70 minutes shorter, Heaven's Gate bombed again, and MGM bought out the financially crippled United Artists. The ailing Western genre virtually vanished during the 1980s, Cimino's career never recovered, and Hollywood studios had had enough of bankrolling financially risky ventures by "auteur" directors. Heaven's Gate's reputation recovered somewhat after its video release, as it garnered praise from some viewers for such visually remarkable sequences as the Harvard dance and the final battle, as well as for David Mansfield's haunting score. Steven Bach's book Final Cut provides a full production history. ~ Lucia Bozzola, Rovi

Joseph Cotten
as `The Reverend Doctor'

T-Bone Burnett
as Member of the Heaven's Gate Band

Stephen Bruton
as Member of the Heaven's Gate Band

Jerry Sullivan
as Governor of Wyoming