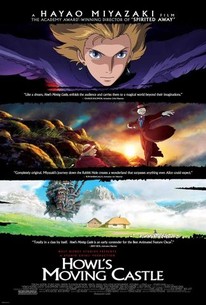 Exquisitely illustrated by master animator Miyazaki, Howl's Moving Castle will delight children with its fantastical story and touch the hearts and minds of older viewers as well.

Hayao Miyazaki, the Japanese animation director who wowed audiences worldwide with his award-winning film Spirited Away, brings another visually spectacular tale of imagination to the screen. Sophie is an 18-year-old girl who toils in the hat shop opened years ago by her late father. Often harassed by local boys, one day Sophie is unexpectedly befriended by Howl, a strange but flamboyant wizard whose large home can travel under its own power. However, the Witch of the Waste is displeased with Sophie and Howl's budding friendship, and turns the pretty young woman into an ugly and aged hag. Sophie takes shelter in Howl's castle, and attempts to find a way to reverse the witch's spell with the help of Calcifer, a subdued but powerful demon who exists in the form of fire, and Markl, who protects the four-way door which can instantly take visitors to other lands and dimensions. Howl's Moving Castle was released in North America by Walt Disney Pictures, who distributed the film both in its original Japanese and in a dubbed English version; the English-speaking voice cast includes Christian Bale, Emily Mortimer, Jean Simmons, Lauren Bacall, and Billy Crystal. ~ Mark Deming, Rovi

Akihiro Miwa
as Witch of the Waste

Yo Oizumi
as Prince Turnip

Akio Ôtsuka
as King of Ingary