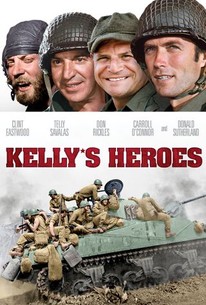 Like M*A*S*H and Catch-22, both released the same year, this military comedy takes place in an earlier war but is really a thinly disguised treatise on the modern-day insanity and avariciousness then unfolding in Vietnam. Clint Eastwood stars as Kelly, a former lieutenant whose illusions about the glory of war, if he has any, are lost when he is busted in rank for following some poorly considered orders in World War II France. After capturing a friendly German officer, Kelly learns the whereabouts of millions of dollars in gold bars, earmarked to finance a military payroll. Taking advantage of a three-day liberty, Kelly assembles a motley trio of fellow soldiers to help him sneak behind enemy lines and retrieve the booty. They include Big Joe (Telly Savalas), a gruff sergeant; Crapgame (Don Rickles), a supply sergeant already enriching himself as a black marketer and con man; and the hippie-like tank commander Oddball (Donald Sutherland). Since crossing into enemy-held territory means heading in the opposite direction of the retreating Allies, Kelly and his men encounter armed resistance. Receiving word of their campaign, the vain General Colt (Carroll O'Connor) mistakes the quartet of freelancing scam artists for all-American heroes. ~ Karl Williams, Rovi