Killer: A Journal of Murder 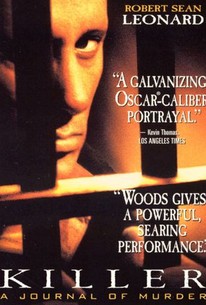 Killer: A Journal of Murder

Killer: A Journal of Murder Photos

With unnerving realism, this fact-based prison drama tells the story of an idealistic young guard who attempts to reach out and somehow help a death-row inmate, a vicious serial killer, considered by some historians as America's first, find peace and redemption. It isn't easy, as brutal, remorseless killer Carl Panzram is considered irredeemable. Still, highly-principled guard Henry Lesser, a devout believer in prison reform, is determined to try. The story is set in 1929 at Leavenworth Prison. Henry is new to the job and it doesn't take him long to discover that his fellow guards are nearly as corrupt and violent as the inmates. After getting to know Carl a bit, Henry is fascinated by the killer's total absence of conscience. Carl does have one request of Henry: he wants paper and a pen so he can write his memoirs. Carl, who kills even in jail, blames society for his condition and demands that society do its duty and execute him, but to Henry, the death penalty is odious and unjust so he begins searching for ways to save Carl from the fate he seems to desire so strongly.

Stephen Mendillo
as Hiram the Guard

Martha A. Woods
as Lady Bartender

Samuel Resnikoff
as uncredited
View All

Critic Reviews for Killer: A Journal of Murder

Audience Reviews for Killer: A Journal of Murder

There are no featured audience reviews for Killer: A Journal of Murder at this time.

Killer: A Journal of Murder Quotes