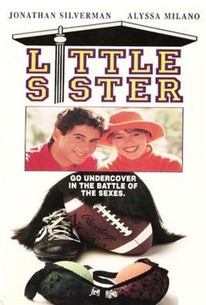 Taking its cues from the classic Some Like It Hot (1959) and the television series Bosom Buddies (1980-82), this comedy combines the teen campus and cross-dressing subgenres. Jonathan Silverman stars as college freshman Bobby, an eager if naïve student who intends, as a legacy, to pledge his father's fraternity. Forced to endure a series of humiliating initiations, Bobby learns that he must retrieve a painting from a sorority, Zeta Alpha Zeta, as his final rite of passage. Dressed in high heels and a wig and sporting a British accent, he pretends to be "Roberta," a hopeful female pledge. Once he meets the beautiful Diana (Alyssa Milano), however, Bobby decides to keep up his ruse and remain with Zeta Alpha Zeta, in an effort to become better acquainted with her. Although he struggles to maintain his fake identity, Bobby learns what women really think about men, using his newfound wisdom both to become a better man and to separate Diana from her loutish boyfriend.

Pamela Winslow
as The Girl

Robert Easton
as M.C.
View All

There are no critic reviews yet for Little Sister. Keep checking Rotten Tomatoes for updates!

There are no featured audience reviews for Little Sister at this time.