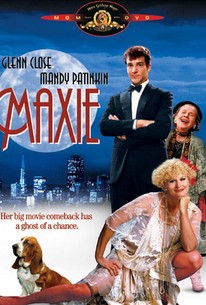 In this comedy, an ordinary woman finds herself sharing both her home and her body with a ghost who has a pronounced wild streak. Jan (Glenn Close) and Nick (Mandy Patinkin) are a couple moving into an apartment in an old Victorian house in San Francisco. Jan is a straight-laced secretary working for a Catholic bishop, while Nick deals in used books. While stripping some old wallpaper in their new home, they discover a message written on the wall, which their flaky landlady Mrs. Lavin (Ruth Gordon) informs them was written by Maxie, a high-spirited flapper who had a career in silent films before dying in a car wreck on her way to audition for D.W. Griffith. Out of curiosity, Jan and Nick rent a video of one of Maxie's films to see her in action, but it just so happens that Maxie's ghost still lives in the house -- and is looking for a human host. Maxie's spirit enters Jan's body and makes her presence known at the most inconvenient times; suddenly mild mannered Jan is kicking up her heels, swilling gin, starting arguements, and acting like a flaming youth straight out of the 1920s. Nick finds Maxie a good bit more exciting than Jan and even tries to launch Maxie back into a movie career by having her audition for a remake of Cleopatra opposite Harry Hamlin; Jan, however, just wants to have her body to herself again. Maxie proved to be one of the last screen appearances for veteran actress Ruth Gordon, who died several weeks before the film was released.

Harry Hamlin
as Himself
View All

There are no featured audience reviews for Maxie at this time.