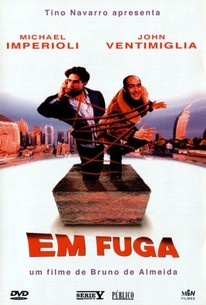 On the Run Ratings & Reviews Explanation

An ordinary guy with a crooked friend discovers no good deed goes unpunished in the comedy On The Run. Albert (Michael Imperioli) is having a quiet evening at home when he gets a call from his old pal Louie (John Ventimigila), whom he hasn't heard from in years. There's a good reason for this -- Louie's been in prison. Ever since childhood, Louie has never been able to stay out of trouble, though whenever they're together, the blame for Louie's indiscretions always seems to fall on Albert's shoulders. Louie calls Albert to tell him he's just broken out of jail and would like Albert to meet him at the bus station. Albert calls the police to tell them a fugitive is due on the next bus, but he soon thinks better of it and makes a dash to the depot, hoping to warn Louie in time. Louie manages to evade the cops, but Albert soon finds himself stuck with Louie for the evening, as he's dragged along for a progressively more dangerous series of misadventures where he's always left holding the bag. Though directed by a Portuguese filmmaker and financed by French and Portuguese production companies, On the Run was filmed on location in New York City, with English dialogue and a primarily American cast.

Tony Zacarro
as Cop in Apartment

Eddie Branquinho
as Cop in Hospital 1

David Callegati
as Cop in Hospital 2
View All

Critic Reviews for On the Run

Audience Reviews for On the Run

There are no featured audience reviews for On the Run at this time.

On the Run Quotes