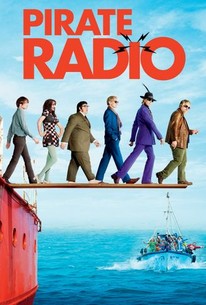 The good cast and rollicking soundtrack eventually drown when this comic homage to pirate radio loses its quippy steam.

In mid- to late-'60s Britain, an unusual yet colorful subculture sprang up and thrived as a product of the upswing in British pop music, only to meet its doom within a few short years. Though the BBC functioned as the country's main source of news and music, its programmers offered very little airtime to rock & roll -- which left an overwhelming need unfulfilled. In response, small bands of "pirate" radio enthusiasts set up broadcasting towers on boats just outside of English boundary waters, and transmitted signals to an estimated 25 million listeners, 24 hours a day and seven days per week. Unsurprisingly, the DJs who took charge of these broadcasts could rival just about anyone in terms of flamboyance and outsized personalities. With Pirate Radio (released as The Boat That Rocked in the U.K.), writer-director Richard Curtis (Love Actually) travels back to the Swinging Sixties and takes a headfirst plunge into this colorful realm. The story opens in 1966, aboard a rusty fishing trawler christened Radio Rock and equipped with pirate broadcasting equipment. Here, the slightly daft elitist Quentin (Bill Nighy) presides over a motley crew of joint-toking, sex-hungry disc jockeys including Dave (Nick Frost), a heavyset boob who nevertheless considers himself a hot property with women and loves to chase skirts; "The Count" (Philip Seymour Hoffman), an American DJ who aspires to be the first person to drop an F-bomb over the British airwaves; the gloom-laden Irishman Simon (Chris O'Dowd); bonked-out hipster Thick Kevin (Tom Brooke); womanizer Mark (Tom Wisdom); Angus (Rhys Darby), a New Zealander whom nobody likes; and the only female member of the group, lesbian cook Felicity (Katherine Parkinson). These misfits pull off quite a show -- enough of one that they attain the status of national idols for the youth culture -- but the super-conservative government minister Dormandy (Kenneth Branagh) detests the whole business and will do almost anything in his power to shut them down.

Philip Seymour Hoffman
as The Count

Will Adamsdale
as News John

News & Interviews for Pirate Radio (The Boat That Rocked)

Critic Reviews for Pirate Radio (The Boat That Rocked)

Audience Reviews for Pirate Radio (The Boat That Rocked)