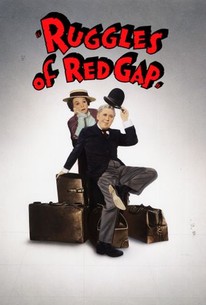 Previously filmed in 1918 and 1923, Harry Leon Wilson's novel achieved movie classic status when it was remade by Leo McCarey in 1935. The story opens in Paris, circa 1908. Ruggles, beautifully underplayed by Charles Laughton, is the ultra-obedient manservant to the bibulous Earl of Burnstead (Roland Young). During one of the Earl's nocturnal forays, nouveau riche American cattle baron Egbert Floud (Charles Ruggles) wins Ruggles in a poker game. Terrified at the prospect of being bundled off to the Wild West, Ruggles' resolve is weakened somewhat when he and the raucous but ingratiating Egbert spend a wild night on the town. (The besotted butler's periodic exclamations of "Whoopee!" are priceless.) Back in the frontier "boom town" of Red Gap, a misunderstanding obliges Egbert's social-climbing wife Effie (Mary Boland) to pass off Ruggles as an aristocratic British army officer, immediately arousing the suspicions of priggish social arbiter Charles Belknap-Jackson (Lucien Littlefield). The longer he spends in America, the more Ruggles grows to like the concept of democracy and self-determination. Of the film's many highlights, two are standouts: the scene in which Ruggles silences a rowdy saloon crowd with his recitation of Lincoln's Gettysburg Address, and the droll, semi-improvised vignette in which dancehall girl Nell Kenner (Leila Hyams) teaches the Earl of Burnstead how to play the drums. Ruggles of Red Gap was filmed for a fourth time in 1950 as the Bob Hope-Lucille Ball musical Fancy Pants.

Jim Welch
as Man in Saloon

Genaro Spagnoli
as Frank the Cabman

Albert Petit
as Waiter at Carousel