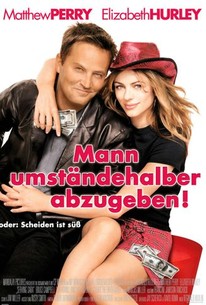 A romantic comedy that's neither funny nor particularly romantic, Serving Sara is a forgettable time waster.

A process server makes an unusual alliance with a beautiful but devious woman in this comedy. Joe Tyler (Matthew Perry) is a former attorney whose career went bust when he picked up some clients who turned out to be associated with the Mafia. These days, Joe makes his living as a process server, who presents people with legal papers -- papers they would usually prefer not to get. One of Joe's fellow servers, Tony (Vincent Pastore), is trying to weasel him out of his job, and has starting tipping off Joe's targets before he can deliver their papers in order to get Joe in dutch with their boss, Ray (Cedric the Entertainer). Joe, however, is able to persuade Ray to give him another chance with a high-profile client, Gordon (Bruce Campbell), a wealthy Texas cattle baron who has decided to divorce his wife and business partner, Sara (Elizabeth Hurley), in order to marry another woman, Kate (Amy Adams). When Joe presents Sara with the divorce papers, she is shocked by the news, which would cost her her half of the Gordon fortune. After Joe gets carjacked and finds herself on the same bus with Sara, she makes him a deal: If he's willing to take back the papers, say he never presented them, and serve a divorce petition to Gordon first, she'll pay Joe an even million dollars. Serving Sara became the focus of some unexpected controversy during its production -- first when Matthew Perry took a brief leave from the production to enter a rehabilitation clinic to fight an addiction to painkillers, and later when Elizabeth Hurley's former boyfriend, Steve Bing, accused Perry of being the father of Hurley's child (a charge both Hurley and Perry denied, and was proven false by blood tests).

Cedric the Entertainer
as Ray Harris

Jerry Stiller
as Milton the Cop

Rick Morrow
as Man in Crowd