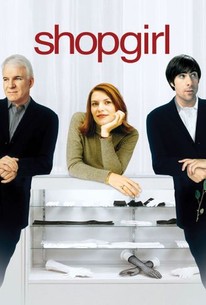 Shopgirl is precariously slight, but it has some intriguing moments, and Danes is luminous.

Based on Steve Martin's bestselling novella, 'Shopgirl' is a funny and poignant story of love in the modern age. The film catches a glimpse inside the lives of three very different people on diverse paths, but all in search of the same thing. Mirabelle is a "plain Jane" overseeing the rarely frequented glove counter at Saks Fifth Avenue in Beverly Hills. An artist struggling to keep up with even the minimum payment on her credit card and student loans, she keeps to herself until a rich, handsome fifty something named Ray Porter sweeps her off her feet. Simultaneously, Mirabelle is being pursued by Jeremy, a basic bachelor who's not quite as cultured and successful as Ray. When fate steps in, the outcome may not always be a storybook ending, because in the end...it was life.

Troy Gregory
as The Volebeat

Scott Michalski
as The Volebeat

Russell Ledford
as The Volebeat

Jeff Oakes
as The Volebeat

Weitz Checks "Compass" and Returns to Fantasy
Critical Consensus: "Dick & Jane" Not Much Fun; "Cheaper" Is Bankrupt
Searchlight & Linklater Meet Up for Some "Fast Food"
View All